A day proclaimed for celebrating the first anniversary of SOTA in VK2 made for a good reason to do a summit activation while in France. Staying near Nice there are plenty of high mountains at the bottom end of the Alps so I chose one of the nearest 4 point summits just to the north. At only 30km away it didn’t seem far, but the topography is such that it is 60km by road. The hire car has a navigation system, but unfortunately does not have the road to the summit so I set it for the nearest town Toudon. On the tourist map for Nice, Mont Vial F/AM-461 is clearly marked so I expected it to be well signposted. This turned out not be the case so I ended up using google maps to find the access road after retracing my steps from Toudon. The mountains here are steep so access was via a series of switchbacks on a narrow, well-maintained road which takes you up from the 950m elevation of the main road. It is possible to drive almost right to the top at 1520m elevation so I parked down from the top to be outside the activation zone. There are a series of communication towers along the ridge just down from the peak. The furthest where the road ends is 300m away and the closest is 100m away. I did not expect much QRM from these.

The panorama image above was constructed from 11 separate images stitched together. It shows the operating point in the centre of the picture and the towers on the right. The left of the picture shows the Var river valley that leads towards Nice, more or less running north-south. The views there were breathtaking. No wonder it is marked on the tourist map!

Once at the peak I posted out a spot using RRT for 20m CW and started setting up the radio and 20m ground plane antenna. The trig point metalwork was used as an attachment point for my 5.4m squid pole with the radiator hanging off it. On RRT I could see some spots for VK stations. The first I tuned to was Andrew VK1NAM who was on Mt McDonald VK1/AC-048. It was pretty surprising to hear Andrew’s voice coming through with some QSB. I gave him a call and he actually heard me just using 5 Watts! There were some clicking noises on the frequency which I put down to the local communications transmitters, and luckily the noise blanker did a pretty good job of dispatching them. My first VK contact from EU – and on SSB too!

I listened on the other frequencies that VKs had spotted but no-one else was heard. It should have been possible to hear VK1MA and VK1MBE but I was probably a bit late getting started – too close to the VK1 sunset.

It was time to get active on my spotted frequency. Once I got started there were plenty of calls and I realised I was out of practice when it comes to handling pileups on CW. After a few EU stations, Andrew VK1DA called in from Mt Gillamatong VK2/ST-034 for my first CW S2S contact with VK. I also worked Tony VK3CAT on CW and when the contacts dried up I shifted to 20m SSB. I was able to work 4 more home stations and a summit-to-summit with Bob VK5FO on Mt Gawler VK5/SW-013. At 0752z it was getting late in the long path window and Bob’s signal was starting to fade. When I next had a chance to tune back his signal was gone completely.

Shack on Mt Vial with KX3 and enhanced RHM8B antenna

I started to look around for other summit-to-summit opportunities but there was nothing more on 20m. With spots for 30m and 40m it was time to modify the antenna for those bands. I connected the Diamond RHM8B to the rig and attached the radiator for the ground plane to the top of the telescopic whip with a jumper lead. This gave me a radiator about 7m long – almost a quarter wave for 30m. To accommodate the extra length I had to lift up the squid pole onto the trig point metalwork to give it some extra height. The photo shows the final arrangement. After tuning the loading coil for 30m I was able to work Wolf DL4MHA on DM/BW-131.

After a time a spot appeared for Ed DD5LP on 40m. He had been on 20m working VK and too near for a contact on that band. On 40m he had a fine signal and was an easy contact. I had not worked him since he moved to EU so it was good to have a chat. At the end he wanted to close down to vacate the peak and get home so left me with the frequency. I stayed around on Mt Vial for some more S2S contacts on 40m and 30m.

All in all a successful activation with 3 VK S2S, 5 VK home stations and 5 EU S2S contacts as well as a bunch of EU home stations. All these were worked using 5 Watts from the internal batteries of the KX3.

The next mountain was Mt Brune F/AM-472 about 15 km from Mt Vial. I used google maps to find the turnoff to this one. It meant driving back to the main road and then carrying on through some small towns and then turning off the D27 road at elevation 1080m to again negotiate some switchbacks. The narrow path up the mountainside was not as well maintained as the one for Mt Vial, but still easily negotiated with a 2-wheel drive. Once near the top at elevation 1380m there is a carpark and then a steep climb on foot to the summit with no really obvious main track. It took about 15 mins of hard climbing to get up to the top at 1518m. There are no towers on top – access would not be possible! 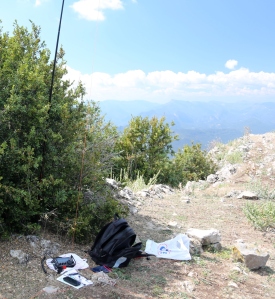 Shack on Mt Brune with KX3 and 20m ground plane

I had limited time so decided just to operate on 20m. Setting up the ground plane is very quick as there are no adjustments so I was on air in no time. All contacts were on SSB except the last which was a S2S contact with Roger F5LKW on Montagne de la Canaille F/CR-254. It was too late for any VK contacts and I didn’t have time to chase too many summit-to-summits.

I had 14 minutes of operating time and made 13 contacts so well and truly qualified the summit. The climb down was much more enjoyable than the climb up and I was soon back in the car on my way to do a collection at Nice airport. My activating for the day was over.

A few days later I received a message on the SOTA reflector from Gerald F6HBI asking why I did not activate Cime des Colettes F/AM-478. This summit sits in between Mt Vial and Mt Brune and is also a 4 point summit. I did look into when planning the day, but access to the summit seemed to require a long hike so I would not have time to get there. It was quicker to drive to Mont Brune for the second summit. It would have been great if I’d had time to do the three summits in the one day.

Thanks to all chasers and activators.
I had a great day out in France celebrating the VK2 SOTA anniversary!