As part of my 2016 Japan trip I travelled to Shizuoka, 180km and about 3 hours drive south of Tokyo. I activated Udoyama JA/SO-120 for the first time with help from my friends Yoshi JG1VOZ and Hiro JA2LXT. This summlt is more accessible to Shizuoka city than Takanesan JA/SO-099 previously considered. Near JA/SO-120 there is a peak and lookout with a TV tower called Nihondaira Prefectural Natural Park and we went there first only to find ourselves 300m away from the real peak. I dare say it would not have been in the Activation Zone either. One must continue on the Shimizu Nihondaira Parkway to (34.9749, 138.4695) and then drive up a rough track 300m and then walk up a steep muddy track 200m to the summit with some bush bashing. The summit is marked with a tag saying 307m and is at (34.973099, 138.4697), locator PM94FX. 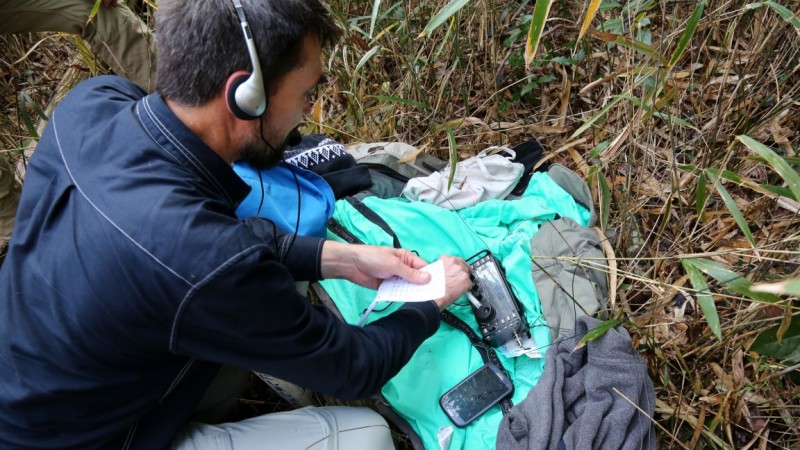 The summit is overgrown with lots of trees. I used a linked ground plane and threw the end of the antenna over a tree. On 20m I made four VK/ZL SSB contacts and three VK on CW using the callsign JR2YFM/2. On 40m CW I made four local contacts. Ended up with more contacts than at Shiroyama JA/KN-022 in less time. I was able to stay on 3 Watts throughout the one hour activation. One contact was a S2S with Takeshi JS1UEH at JA/IB-006 on 40m – my first for JA. This was also a first activation of Udoyama JA/SO-120.

Thank you for all the contacts and for those that chased. One discovery via SOTAwatch was that 7032 is used for RTTY in Japan. When 40m is open to JA from VK it may be better to stay below 7032.

There is a short video from this activation here.

The first SOTA summit I climbed during my visit to Japan was Shiroyama JA/KN-022. This summit is on the western outskirts of Tokyo and just over the border into Kanagawa prefecture. And climb it was as the bus drops you off a little above sea level. The summit is at 375m elevation rising up steeply from the flatlands of Tokyo.

Public transport to the summit is very convenient. Take one train from the major station Shinjuku in Tokyo until the end of the Keio Sagamihara line at Hashimoto (station KO45). Then take the Hashimoto 01 bus for Mikage to stop 14 at the base of the mountain called Tsukuiko Kanko Center mae (35.58643N, 139.280824E). Timetable and route is here. Once starting the climb, there are maps available en-route.

My station consisted of a linked ground plane antenna that I had made that day after scouring Akihabara for parts. It had links for 40m, 20m, 15m and 10m. The radials were designed for 20m. A tree provided the top support for the vertical section of the ground plane.

The radio used was the KX3 on internal AA alkaline batteries.With such a small power source the radio could only be used QRPp and I started out at 3 Watts. With the 6m/10m SOTA challenge in its last day, I set up on 10m at first.On SSB I was rewarded with 5 contacts: JJ1SWI/1, VK4RF, VK4HA, JA1JCF and 7K1WRK/1. I tried CW too but made no contacts in that mode. Callsign used was JR2YFM/1. QTH locator: PM95pn.

Lowering the vertical, I joined up the first pair of wires and was then on 15m. On that band I made one contact with JJ1SWI/1 again. The radio was starting to shut down during transmit occasionally so I had dropped the power to 2 Watts. Seemed unusual to only have one call on 15m, however, there may have been no propagation. JJ1SWI is local to Tokyo so it was a ground wave contact.

Next was 40m and two more links were joined in the antenna. On this band there was another call from JJ1SWI/1 at about the same strength as on the other two bands. I had reduced my power down to 1 Watt at this stage.

For the final change it was to 20m CW and after dropping the antenna and removing a link I was rewarded with a call from Rick VK4RF and his alter-ego VK4HA. Sigs received on this band were 58 from Rick so quite a bit stronger than on 10m. The difference was that I worked Rick using 3W on 10m but only 1W on 20m.

With little battery left and the light fading fast I had to pack up quickly and drop down the mountain. It took about 30 mins to climb to the top and about 20 mins to descend. With a 3 minute wait for the bus I was on my way back to Tokyo. Allow 90 mins to get to Shinjuku station.

So, a very successful activation. Although I made 4 contacts on CW, there were only 3 unique stations so I am yet to qualify on CW. I well and truly qualified on SSB. This is a very easy one to activate if you are in Tokyo as the public transport is so convenient. The only difficult thing is the climb. Remarkably, there is no QRM at the top of the mountain. Nice views of the dam and countryside below too.