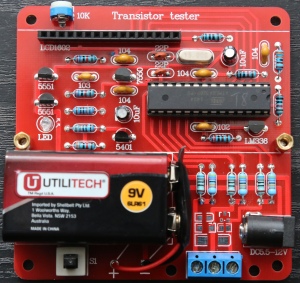 On the MWRS radio club mailing list there was discussion of a component tester kit with the claim that it was surprisingly accurate. The cost of the kit was surprisingly cheap – under $15 shipped. With the prospect of being able to measure capacitor ESR, the offer was too enticing so I ordered one on impulse from the distributor in China. 17 days later the package arrived – a surprisingly large padded pad containing a quite small anti-static bag full of components. And it was just that – a bag where components had been tossed in. The LCD was covered in bubblewrap and some of the smaller components had slid their way inside. There was no documentation, but the double-sided board had an overlay showing component values.

Experienced kit builders can just go ahead and start building. Its just a case of picking up a component and hunting around the board overlay to find where it should be. The supplied resistors have 1% tolerance and the colour bands are pretty small so I measured each one before placing them. The markings on the transistors are very small so it is helpful to have a magnifying glass to identify the three different types (5401, 5551, 7550) plus the voltage reference (LM336). Other constructors may find the hi-res picture of the main board useful. Click and zoom to see the detail. 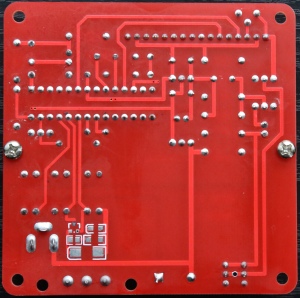 Surprisingly, one of the pins of the 28-pin socket had fallen out. I found it amongst the jumble of components and put it back inline. Its always good to check components before soldering them! The Liquid Crystal Display (LCD1602) is attached to the main board by a pair of 16-pin single row male and female inline connectors. I wasn’t sure which connector to put on the board. Luckily I had another project with the same arrangement so ended up putting the female connector on the board and attaching the male connector to the LCD. The pushbutton switch (S1) is a DPDT with no polarity marked on it so the terminals were identified that close when the switch is pressed. The LED seems redundant as the LCD backlight shines when the unit is on. The LED is also hidden under the LCD. Plugging in the Atmel ATMEGA 328P 28-pin chip one needs to ensure the pin 1 dot is in the top row. Then after plugging in the LCD I was ready for…

The only part not supplied is a 9V battery (or an external power supply between 5.5 and 12V). Throwing caution to the wind I supplied power and pushed the button and was instantly rewarded with a brightly lit LCD, but nothing could be read on the screen. The 10K pot at the top was twiddled and near the end of its range the LCD could be viewed with white letters on a blue background. It reported that there was no part connected. Eureka!

Then the checkout phase commenced. I tried a short circuit between the left 2 terminals and got a reading of 0.5Ω. Between the right 2 terminals it was 0.3Ω. Then I tried a 220k 1% resistor and it measured as 219.6kΩ on the tester as against 219.1kΩ on my trusty Fluke 77 multimeter. This is looking pretty good.

Next I tried a capacitor and with the minimum testable value being 25 pF, a 100 pF was put across the terminals. It came out at 109 pF and a 47 pF came out at 57 pF. Also not too bad, but maybe could be better as there seemed to be a consistent overread. 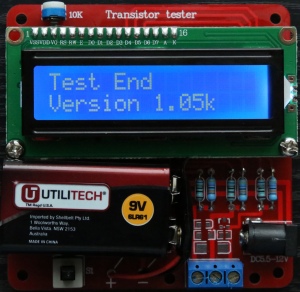 I’d got this far without looking at any documentation. Now it was time to get serious! A posting on the vendor’s review comments yielded a link to an early version of the project doco, version 0.96k. It turned out the whole design is in the public domain. The document described the design in much detail and at 4,4 there was a section on a Selftest Function. Placing a short across the three terminals and pressing the button triggered the function. A lot of different screens came up and at the end, the version number was displayed: 1.05k. If I wanted to find out what this device was capable of, I needed the right documentation for this particular version. It didn’t take long with a search engine to find the correct documentation.

The new document revealed three separate phases of the self-test and it described a better calibration scheme than the earlier version. The phases are:

The test needed to be repeated a few times, mostly to get the test hardware in the right state at the right time to match the software. There is no wait between the first and second phases. The third phase does wait for you to put the capacitor on, but eventually will time out and continue to the end. Missing a phase results in incorrect calibration without warning.

With the unit now properly calibrated it was time to play. I wanted to check out resistors, capacitors, inductors and semiconductors. Firstly, a short circuit across the terminals yielded readings of 0.1Ω showing that the zero error apparent before the calibration had (almost) been eliminated. Progress!

The 100 pF capacitor gave a reading of 98 pF on either set of terminals so the calibration had compensated for the internal capacitance of the tester – great stuff! A 22 uF capacitor was read as 25.65 uF with ESR 3.1Ω. See the screenshots. 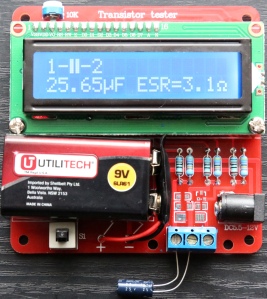 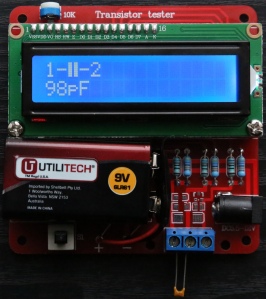 An inductor based on a ferrite core toroid was tested and was shown as 4.76 mH with an ESR of 0.3Ω.

A BC237 transistor was tested and the tester reported it as NPN, identified the Emitter, Base and Collector leads and reported the gain or Beta as 171 with a Base-Emitter forward voltage drop of 722 mV. What a useful device!

I also tested a bridge rectifier and the tester reported the voltage drop of two of the internal diodes.

Also tested was an enhancement mode N-channel power MOSFET and the tester reported the threshold voltage and the input capacitance. 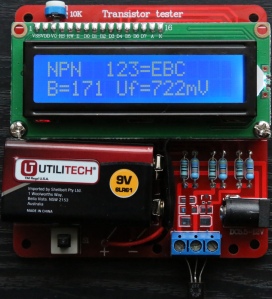 The tester is most portable and convenient when powered by battery. After a reading is done the display stays on for 28 seconds before the device is automatically shut off. When the device is on, current consumption from a 9V battery is in the range 16-21 mA. A lot of this current goes to power the LCD backlight (and perhaps the LED). It is possible to swap the LCD type and get a different display appearance and also reduce power consumption.

As mentioned, I had a display for another project marked as a Zijing Electronics MST01D002 that seemed to be similar so I bravely plugged it in. What could possibly go wrong? The mounting holes do not align with the board standoffs, but voila! – they are electrically compatible. There was nothing on the display until the contrast pot was twiddled – and the result is shown in the picture. Using this display the current consumption dropped to 10-15 mA which is a big saving. Personally, I prefer the blue display with the backlight – it looks very nice. I will just have to replace the battery more often.

The Pros and Cons 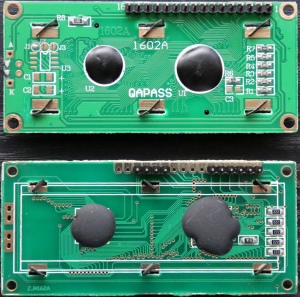 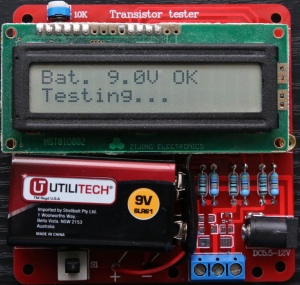 The tester was pretty quick to build and get running. The kit was complete and had good quality components. The calibration is slightly fiddly but did yield good results. The device can test most passives and semiconductors and can automatically identify 2 and 3-terminal components. Both through-hole and surface mount components are catered for. The software is still in active development and the unit can be upgraded. It should be a useful addition to the VK2IO radio shack – and probably the best test instrument you can get for 15 bucks and a few hours of your time! And yes – surprisingly accurate.