50km west of the city lies the second of Sydney’s two summits, VK2/SY-002. Overlooking the Nepean River it is a picturesque spot and the Rileys Mountain Lookout is well within the activation zone. Access is gained by driving to the end of Fairlight Rd Mulgoa and then walking a fire trail for 2km, about a half hour walk. At the top there is the lookout, the Mulgoa trig point and a communications tower. Mobile phone reception is reliable here.

On the day, the weather had been rainy and there was complete cloud cover for the walk in. Upon reaching the top, checked out the various landmarks and decided to position 20m from the lookout along the walking path. This is about 200m from the communications tower and Mulgoa trig point. There is a small clearing on the side of the path to set up the portable shack as well as a convenient low tree to strap the squid pole to. I used a new, safer elastic strap that has carabiners on the ends rather than hooks. if the strap were to suddenly recoil, the carabiners are a lot less likely to cause injury. I’d always been concerned with the old straps to keep eyes well away. The new straps are longer and are more stretchy.

The summit activation had two main aims. The first was to log as many summit-to-summit contacts as possible since many activations had been planned for the Saturday. The second was to work through the SO-50 satellite, and to that end a pair of triband held-helds were brought along. I prepared by reading this guide by Howard G6LVB.

The ZS6BKW doublet was set up on the 10m squid pole and the shack set up. It would be over 2 hours before SO-50 arrived so plenty of time for HF. Setup was completed by 2345z, a little behind schedule due to scoping out the area. During the walk-in, Sid ZS5AYC and Adele ZS5APT had spotted and activated Tenison Woods Mtn VK4/SE-117 in SE Qld. The first few minutes were spent trying to find them on 40m and also 20m, but they had closed. I was interested to work them having been the first activator of Tenison Woods Mtn and having corresponded with Sid about that location during the week. 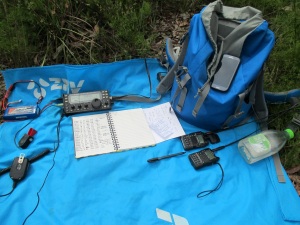 It wasn’t long before some spots started arriving on SOTAwatch. In the 10 mins before UTC rollover, three other summits were on air, and the same were worked after rollover with one new one. With the summit rush over, I could start to work through the bands. As has been my recent habit, I started on 6m SSB and spotted for 52.200 MHz with one chaser call received – better than the usual result. Then I spotted for 40m CW and started working the callers. On the third call, I received an SMS from Andrew VK1NAM who had set up on Mt Stomlo. Not wanting to delay things, I sent QRX on CW and switched back to 6m to work Andrew. Signals were quite weak and there was a slow fade until I could no longer hear Andrew. Still, I was very pleased to have made a S2S on 6m as well as a second contact on that band.

I returned to 40m CW having left the chasers hanging for 15 mins while I worked Andrew and Marc VK3OHM who came up on 40m SSB. Sorry chasers! There were 3 more contacts on CW then a S2S with Bernard VK2IB on CW. With no more 40m callers I moved to 20m CW and worked two stations including John VK6NU, but his signals were not strong.

With both CW alerted bands done it was time to move to SSB. I started with 10m and looked around for a clear spot. I could hear US stations so the band was open. I got one call from Anthony VK6MAC and he was very strong. 10m was much better than 20m for VK6. Moving to 15m I had one call from VK5WG and then to 20m where there were three calls.

It was 20 minutes before the satellite pass and I started to set up the two hand-helds. The main things were the sub-audible tone on the 2m transmitter of 67Hz and changing the step to 5 kHz on the UHF receiver. On the receiver the squelch was opened up as signals were expected to be weak. Earphones were used.

Ground track for SO-50 pass

SO-50 was heard just before the bird flew directly overhead. VK2WEL and Hil VK2IUW were there so I put up a few calls. VK2IUW was only a few suburbs away so I heard him S9 on the uplink. A little while later I heard Adam VK2YK call once so tried to call. Fairly shortly afterwards reception was lost completely for me and I heard no more from the satellite. It seemed to go from noise-free to nothing all of a sudden, however, it is outputting only 100mW.

I wasn’t able to log any contacts, but I did hear SO-50 and did get into it with 5W and a simple antenna. I’m happy with that. The S2S will have to wait until next time. We might have done it if Adam hadn’t been affected by de-sense mid-pass. It certainly would have been possible if I’d had a 7/3 element yagi like Adam. Must build one 🙂

With the SO-50 excitement over, I returned to the KX3 and operated on 40m SSB. I put a spot out and started working the chasers. Wasn’t long before there was a call from Adam VK2YK. We got the S2S in on 40m and discussed the activity. Adam had worked 2 stations and also heard me calling. I also worked Hil VK2IUW on 40m who had made contact with Adam through SO-50. It was great catching up with the guys I had heard through the satellite, albeit briefly. Congratulations Adam for making two contacts and giving the S2S a go! It was certainly a lot of fun and bound to be repeated.

Stunning views over the Nepean River from Rileys Mtn Lookout

On 40m more calls were fielded from chasers and after a while Sid and Adele called in. They were at Jollys lookout near Mt Nebo, just down the road from Tenison Woods Mtn and a place I had recommended for great views over Brisbane. At first signals were weak until Sid improved the antenna. A spot came up from southern VK7 and I was able to hear and work Reuben VK7FREU, Paul VK7PAH and Justin VK7TW over a 1050km path on 40m from VK7/WC-013. This would not have been possible from home. After that I went back to calling on 40m and worked 4 more chasers and one summit. The activation ended with a few more S2S contacts. I had a chat to Peter VK3PF who had been sitting on VK3/VT-049 all day. He let me know there were no more summit activations coming up for a while so I was safe to close down. After a bite to eat I did just that leaving the summit at 2pm, and on the way back visiting The Rock lookout near the carpark for more great views of the Nepean River.

54 contacts (11 CW), 26 summit-to-summits (19 uniques), 127 S2S pts.
It was exciting (and a little frantic) working SO-50 and I clearly need to build a 70cm beam to improve reception.
Thanks to all the chasers and activators for the contacts. 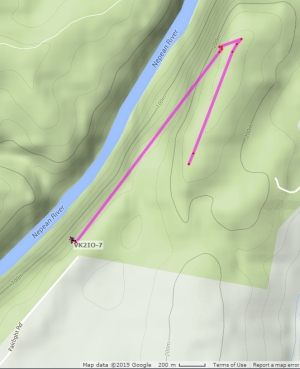 APRS track to and from the summit

During the walk in and out the 2m APRS beacon was enabled on my VX-8R using the usual callsign VK2IO-7. Given the proximity of the local repeater, it was surprising how few posits made it into the APRS network. It could be due to congestion or perhaps I need to raise my antenna up into the clear and add some ground radials.