Matt VK2DAG was travelling up to the Central Tablelands of NSW to try some microwave summit-to-summit contacts with Justin VK2CU on Mt Canobolas VK2/CT-001 from Mt Lambie VK2/CT-007 – or at least that was the plan. On the way he stopped at Mt Banks VK2/CT-032, decided it was too windy (and I expect too far to lug the gear). Continuing on he arrived at the Glowworm Tunnel Rd summit VK2/CT-012 just north of Lithgow. This summit has no obvious peak and is surrounded by tall trees – not a good takeoff for microwaves, but great for HF.

After Matt activated the summit on 40m SSB he was keen to send some SSTV. Moving off 7090 kHz to 7105 kHz for the mode change, Matt took a photo and transferred it to his laptop. He then sent this picture in Robot 36 format:

The whole image was received without QRM, however it contained quite a few white dots and Matt thought this might be due to overdriving the audio on the transceiver. The resolution was also a little low for such a busy picture so I suggested using Martin 2 instead. In the end, Matt sent the SSTV image again using Martin 1 (which takes even longer than Martin 2). Here is the result: 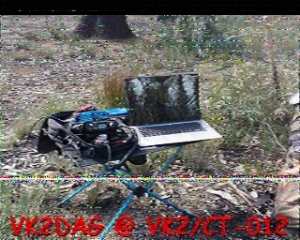 Nice picture, Matt! The image has much higher resolution than the first one. There are still white dots, but they are less obtrusive. The white line near the bottom is due to local QRM (I forgot to disable local HF transmitters). It looks like the summit is recovering nicely from last September’s bushfire. I can clearly see green grass now whereas it was all black when I activated.

With Matt having a computer available, he was also able to receive SSTV. I suggested it would be possible for me to send the picture back. Not having sent an SSTV picture before, there was a bit of hunting around for all the right buttons in MMSSTV to get the received picture transferred to the transmit frame. Then the problem I had was eliminating the template that seemed to automatically pop up over the top. A bit more playing and that was gone and then I was able to send it back in Robot 36 format. I haven’t seen the result, but Matt could identify the white dots that I was talking about.

Maybe this is the first time SSTV has been sent and received on a summit!
To qualify as an SSTV QSO it would require sending signal reports both ways in SSTV. We aren’t far away from this.

Thanks, Matt. Another summit via SSTV to add to the collection.

UPDATE 5/8/14: Here is the picture that Matt received on the summit from me: 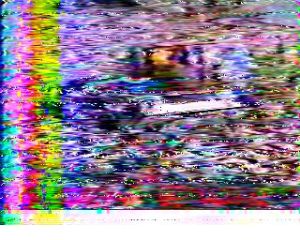 Image received by Matt on the summit from me

Not ideal! Clearly one or both of us has work to do. I’ll be trying out sending locally to make sure things are working. This was sent in Robot 36 format which has lower resolution, but still there seems to be a synchronisation issue. The blue, magenta and yellow bands on the left of the picture seem like mysterious echoes of the sync pulse. It’s all up from here…

Thanks for the pingback, Matt.